It was a very full day. (You can see a detailed account here.) A diverse gathering of Buddhist teachers and leaders, from a range of lineages, ethnic backgrounds, and geographical locations, made it to Washington DC to take part in what was seen as a historic occasion. This was the first time a range of Buddhist representatives had been invited and welcomed into the White House, to register their concerns, and make themselves known as a body that has political and social impact. Perhaps more important, was that we, as Buddhists, recognized ourselves as stepping out to engage more fully on the political stage.

As a gesture of moving toward making a political statement, we submitted two statements on behalf of Buddhists, one on Racism, and one on Climate Change.

An article a few days before in the Washington Post asked, “Are we about to enter the era of the political Buddhist?” It went on to say, “On Thursday about 125 U.S. Buddhist leaders from across the spectrum will gather in Washington for what organizers say may be the biggest conference ever focused on bringing their faith communities into public, civic life. After the conference, the group will meet with officials at the White House, which longtime writers on U.S. Buddhism say is a first….The daylong conference represents, some experts say, the start of a civic awakening not only among U.S. Buddhists, but even Buddhists overseas, where spiritual and religious life can sometimes be separated from things like politics and policy. U.S. Buddhists have high rates of political attentiveness and voting, but until recent years haven’t considered or focused specifically on how their Buddhism translates into public action.”

In my own estimation, the primary importance of the White House visit was placing ourselves as politically and socially engaged in response to the pressing issues of our times, and in doing so, overturning a somewhat erroneous narrative that Buddhism is passive and detached. (While some Buddhists maybe, that is not what the Buddha taught or lived.)

As millions of tons of carbon, nitrous oxide and methane gases continue to heat our biosphere, it is not a moment too soon to step up. Not only by focusing on the consequences, but also on the causes, right down to the most profound cause of separative consciousness. What is very affirming to understand, is how much we have to offer into the social and political discourse of America, and further afield, as a Buddhist collective.

In response to some very good questions in the group Q&A session with State Representatives, while seated in an auditorium in the South Wing, I found myself becoming somewhat agitated as the Associate Director for the White House Council for Environmental Quality, Angela Barranco, encouraged us as Buddhists to be engaged in increasing pressure around policy. While an important point, and while her overall address was excellent, I commented to her that, while we can all do something, considering the urgency of our situation, and considering that real power lies in government, what seems more important is that the government shift billions of dollars in subsidies from the fossil fuel industry to renewables. Of course, as she pointed out, and as we are all aware, even with the best will in the world, political machinations distort an expedient and clear response. (And, of course, huge power now lies with the Corporations and their overarching influence.)

Overall, while it was a long day with presentations beginning at 9.30am and continuing to 5pm, and while there was too little time to talk together, which would have been great, there were excellent presentations in the morning from members of the Buddhist community, and very engaging, open, transparent and positive input from the government officials in the afternoon. It was clear to all, that this meeting of Buddhists, while the first in the White House, would not be the last.

One final word; kudos to Buddhist Peace Fellowship for bringing great banners that we could get behind, (literally and figuratevely!) 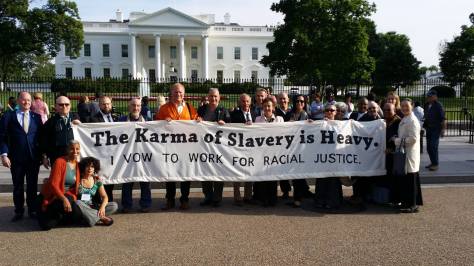 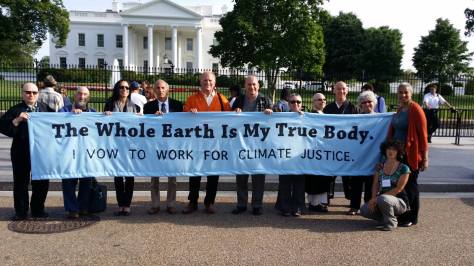